Just so you know how mean my human treats me:
This is the game she made me join. Recognize a pattern there? Exactly. If you followed my blog you realize it’s Darcy and Lizzy all over again, this time the kraut-version.

Stop whining, it’s going to be an adventure. Especially for you.

Remember? Stuff in italics are comments by my human.
Anyway, let’s be done with this. What do I have to do?

Find husbands for you three daughters.

Ha! Nothing so easy! Actually that is something I have done before. Just grab her by the hair and drag her along to some lad’s tent. Shove her in, if she does not get out within a blink, they’re married.

Erm, that’s not how it works here, I’m afraid. You, as the mother – I mean, as the father – will send your daughters to places where they can meet eligible men.

How is that different from what I said?

It cannot be just any man. They have certain expectations concerning your daughter’s appearance, knowledge and reputation. There’s always room for improvement.

I don’t think I like the sound of it. Will have a closer look at my daughter first. This is Otilie. She has a very high reputation but I assume it’s not for her fighting qualities. By human standards she’s not pretty and has no knowledge whatsoever. Not at all bad. Perhaps there is a little bit of orcish blood running through her veins.

Her reputation means that she has high moral principles.

I think it’s wise to go and have a look at the possible future husbands myself before I unleash my daughters on them. I mean, not to marry them myself – shut up! – but to make sure they’re up to the task.

Well…, okay, I’m sure the game allows for some minor adaptations.

Right, so. Where do I go first? There are symbols next to the cards. Explain.

The symbols help you to figure out what sort of improvement your daughters could make at the place in question.

Good. I’m going for the bottle. Seedy bar, is it? Can I stay there for the rest of the game?

No, you have to move every round. Oh, and by the way, there will be other mothers who try to marry off their daughters as well. So make sure you get the best husbands before they do.

Are the mothers sexy? Something for my tastes perhaps?

The seedy bar it is then. I’ll have a drink or two. Don’t care if it lowers Otilie’s reputation. Do I have to pick one of the gentlemen at the bar for her now? Oh, well… As a candidate for Otilie his expectations shouldn’t be too high, given her non-existent skills and already
declin 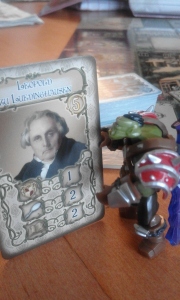 ing reputation. Leopold zu Luedinghausen, he looks stupid enough to fall for her.

Now the other mothers make their move.

Hang on, one of them is courting the same stupid guy! That’s…, that’s…

…the point of the game, really. Thrakbog, it’s a competition!

Oh, if your fellow orcs could hear you now.

Shut up. I’ll go to the poor house next. That improves my reputation,

right? And the men…, oh, wait! Prick Darcy is here. Only he labours under the pseudonym Wilhelm von Weiden. Undercover? On the run from Lizzy? He’s a bigamist!

Whatever. The other mothers are doing much better than you, just so you know. And their daughters are highly focussed. Perhaps Otilie and Wilhelm would not be a perfect match.

Alright, I’ll have a walk on the boulevard. That means I improve our moral standards and it includes a bit of book reading. The things I go through…
The men are old and boring. On the plus-side: they seem to be desperate. Almost no expectations as to my daughter’s appearance. I’ll go back to the seedy bar next.

Leopold is still there.

Bit of a bore, that guy. Doesn’t even drink, apparently. Imagine taking him with me on a monster hunt.

But he’s not for you! He’s supposed to marry your daughter.

Well, Shonka is a great warrior.

Okay, okay. I go for a walk in the park.

Leopold is there too. He seems to be more than ready to become your son in law. But Otilie still doesn’t match his expectations.

I need to pimp her then. Back to the theater and then a new dress would be in order.

But Otilie is going to the altar now. Well done, Thrakbog.

Are we done then? Did I win the game?

Unfortunately not. There are two more daughters to go.

Just like in real life. Can Cecilia pick up where Otilie left? I mean with 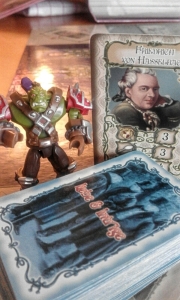 the men that showed some interest?

Nope. She has to find her own suitors. Or actually, you have to find them.

Yep, I honestly think some of these guys fancied me more than my girls. Must be my strong and powerful appearance. More muscle, less lace.

Could be the smell. They appear to be nearly unconscious.

I hate you. Actually, I think I go back to that seedy bar and have a few drinks with the more relaxed guys. Last man standing gets Cecilia. Cheers.

The boardgame was published by Goldsieber. Unfortunately there is no link to the game on their webside.
So, look here instead.

2 thoughts on “Love and Intrigues”

recently on my mind

What are you looking for?

There is more stuff here, beside the blog:

Find me here as well:

8 things that would never exist in an orcish society

5 things that should exist in an orcish society

daily soaps (the soapy bit might be a bit questionable though)

Bringing Games and Gamers Together!

Have a Biscuit, Potter

Too lazy to be a writer - Too egotistical to be quiet

Edge of the Empire - Age of Rebellion - Force and Destiny

FictionPress Authors Breaking Into the Publishing Industry, One Book At A Time

tales from the Police courts of the metropolis

This Jane Austen blog brings Jane Austen, her novels, and the Regency Period alive through food, dress, social customs, and other 19th C. historical details related to this topic.

The Podcast That Brings Board Games to Life

A Blast From The Past